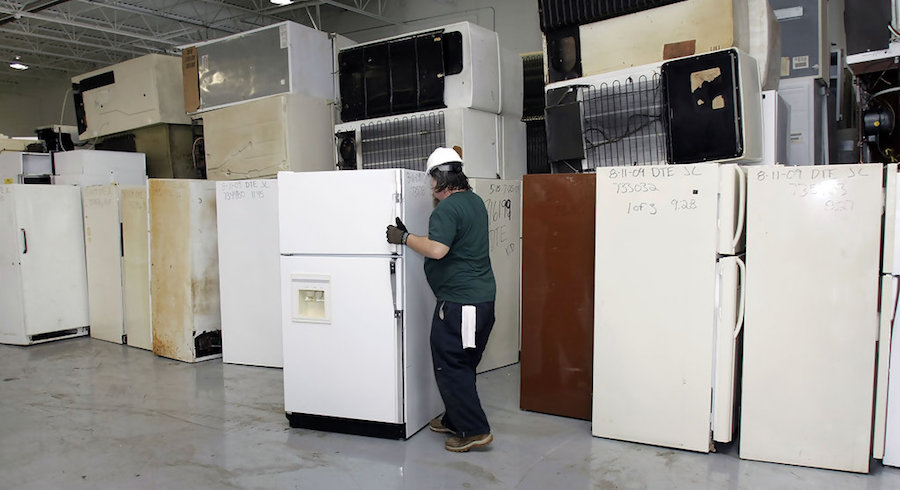 Replacing or removing underutilized fridges an easy approach to save energy

Saving energy does not need a revolutionary approach. It can be done with an analysis of current situations. After a British Columbia school district counted the number of refrigerators in its 22 schools, they removed the fridges that were underused.

“It is not an original idea but certainly it works,” said manager of facilities and transportation for School District 27 (SD27), Alex Telford. The idea for the project came from an Educational Facility Managers Association of BC conference, where school energy managers meet to share ideas and lessons from their districts.

Telford and his team counted 133 fridges in SD27, which is located in the central interior. The annual cost of running the fridges was around $33,000 every year. They eliminated 18 and replaced another 10 with high-efficiency fridges, resulting in an estimated cost savings of $6,500 annually. New fridges consume around 40 to 45 watts, while older fridges can consume as much as 350 watts. This energy difference can be the difference of up to $400 per year for each fridge.

“The difference is huge,” said Telford. “In some cases we were paying for a new fridge in two years.”

Telford did a walkthrough of his district’s schools to see how they were being used. Some fridges were nearly empty – at times an entire fridge would hold just a few condiments. In fact, 18 fridges were found to be empty or filled with just a bit of food. His favourite story was about a fridge being used by a lunch program.

Telford said energy efficiency is an ongoing project and reducing the number of refrigerators was a relatively easy project with significant results.

“We are always looking for interesting methods and this was a low hanging fruit. It was a really good business case.”

In a related project, Telford and his team analyzed the energy consumption of vending machines in the district’s three high schools. Cold beverage vending machines can use up to 800 watts of electricity.

SD27 high schools now sell juice and snacks at the schools’ canteens instead of through vending machines. The schools buy stock for cheaper and they can control the time of sale to only break times.

“It’s less invasive for their classrooms – students aren’t getting a cold drink during their class time anymore. And they’re making more profit off it, and the district is saving electricity.”

In addition, it was a significant energy expense to keep the vending machines cool during breaks, especially the long summer break. “We certainly don’t want to be providing cold drinks that just sit there.”